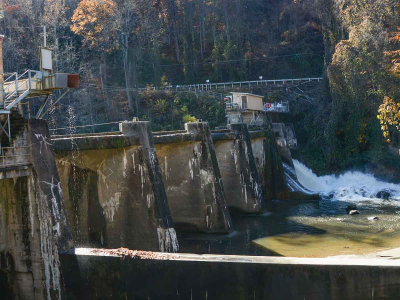 In a close vote on June 2, the Cherokee Tribal Council voted against a resolution to proceed with the purchase and removal of the old Ela Dam – despite a unanimous vote on February 3 that the Eastern Band of Indians Cherokee leads a coalition to work for the removal of the dam and a unanimous vote of Timber Committee May 16 to recommend the purchase resolution to the Board.

It is unclear why some tribal council members opposed the resolution. During the lengthy discussion leading up to the vote, no one made a definitive statement of dissent, although Agriculture and Natural Resources Secretary Joey Owle answered a host of questions.

Many of these questions related to issues of accountability and funding. Owle assured the Board that the tribe would have “essentially zero” liability throughout the process and that unprecedented funding for the dam removal through the federal infrastructure, along with support from the U.S. Fish and Wildlife Service, meant that grant money would cover all purchase, development, and demolition costs.

Vice President Albert Rose questioned why the tribe needed to be involved, if any of the coalition members interested in removing the dam could apply for the federal grant.

“If they can get the money then why do they need us?” he said.

“I would reply, why shouldn’t we run this? Owl replied

Owle told Rose that American Rivers, the partner who would act as project manager on the effort, was not in the business of owning any assets and funding for the project was virtually assured. Of the coalition members, he said, the tribe was best positioned to be the ultimate owner of the property. In addition, the purchase would come with 61 acres of waterfront property on Cherokee ancestral lands.

“Yes, someone else can do it, but why not let the tribe run this now?” Owl said. “We are the first inhabitants of this landscape. We are stewards of our resources. The amount of funding and the funding sources that are present, when will we see that in a lifetime? »

Wolfetown Rep. Bo Crowe suggested the resolution be tabled for a working session, but Owle said any delay would be fatal to the effort.

“To put it bluntly, if this doesn’t pass today, this bill is pretty much dead in the water,” he said.

The Ela dam came to the public’s attention after a massive discharge of sediment last October blanketed the river downstream, likely wiping out aquatic communities downstream. Commissioned in 1925, the dam is small, old, and produces very little energy. Its owner, Northbrook Carolina Hydro II, earns just $55,300 a year from its operation.

The release of sediment prompted a coalition of nonprofits, governments and agencies — along with Northbrook — to start talking about removing the dam altogether.

“When you clear a river, the river can become a river again,” said Erin McCombs, Southeast Conservation Director for American Rivers. “It can be fluid. I like to think of rivers as the lifeblood of the earth. We wouldn’t want blockages in our own veins and arteries, so allowing that connectivity and flow back to a river is a real permanent good for the landscape.

While dams provide a continuous source of energy, they completely alter the river ecosystem around them, cutting off the upstream part from the downstream part, isolating populations of aquatic species and complicating natural migrations such as fish spawning grounds. . The rate of evaporation from the impoundment behind the dam is much higher than what would occur naturally in a flowing river, and sediment accumulates there instead of moving through the catchment.

In the months since the council voted unanimously to see the tribe lead the withdrawal efforts, the coalition met regularly to discuss the way forward, with Owle keeping Tribal Council members informed. As a result of the sediment dump, Northbrook has received violation notices from multiple agencies and must clean up the sediment below the dam. He began this work in December but stopped in March for the Sickleshank spawning season. Sanitation is due to resume on June 15, but Northbrook has made it clear that it only has resources to either complete the cleanup or contribute to disposal efforts – not both.

However, some of those same representatives voted against June 2. In opposition were Crowe, Rose, President Richard French, Yellowhill Rep. David Wolfe, and Wolfetown Rep. Bill Taylor. Snowbird/Cherokee County Rep. Bucky Brown, who walked out minutes before the vote, was counted absent. Due to the weighted system used to calculate Tribal Council votes, this resulted in a vote of 44 for, 50 against and 6 absentees.

The decision was a blow to Owle, McCombs and the rest of the coalition, but it’s not the end of the pullout efforts. Owle and McCombs said they hoped another band member would agree to purchase the dam before the deadline.

“We have an incredibly strong coalition that has been meeting almost every two weeks for about six months,” McCombs said, “and there’s a lot of interest and excitement and passion to see a free Oconaluftee River, and thanks to this strong partnership we are excited to come together and see what our options might be.