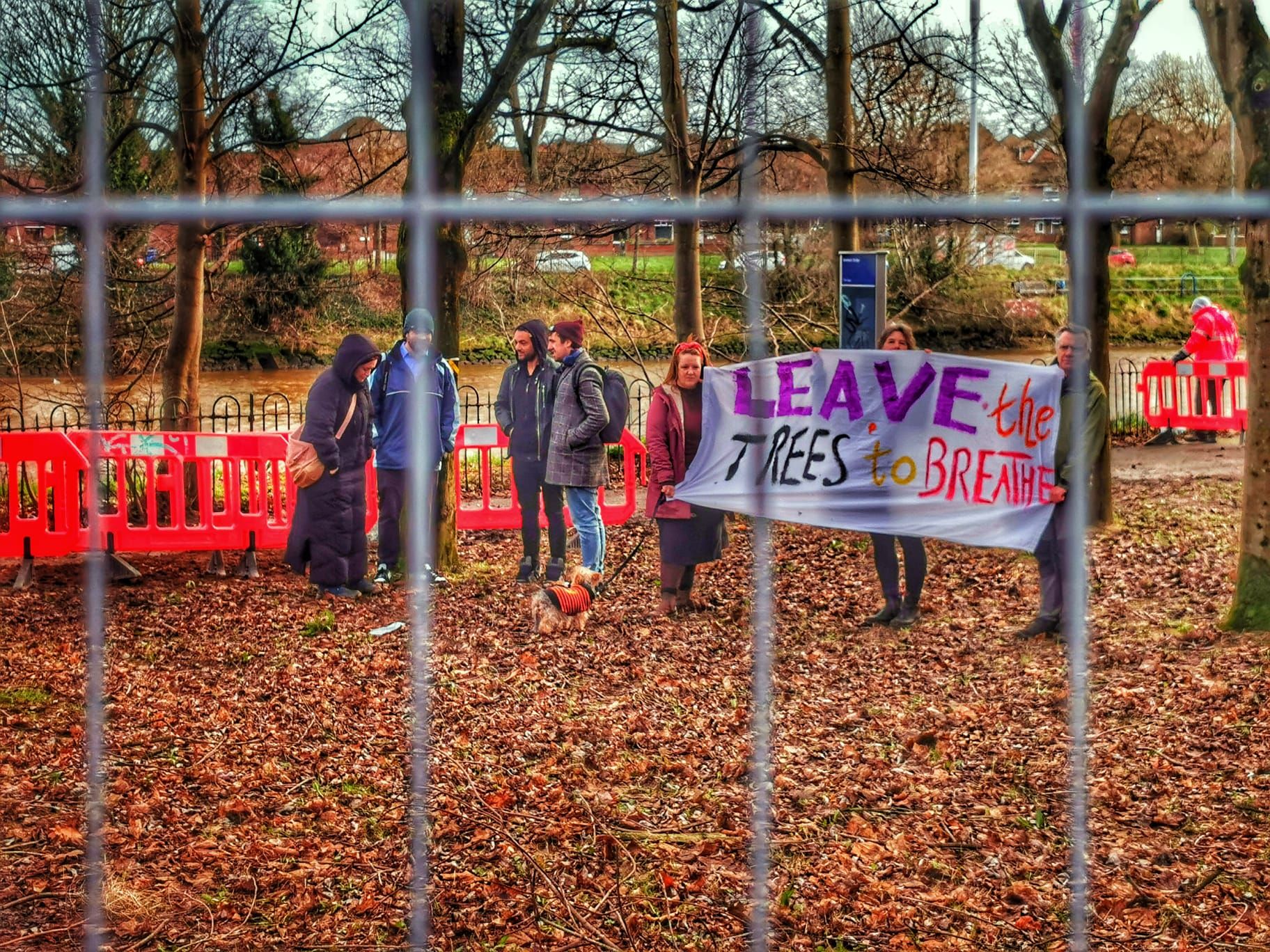 RESIDENTS protesting the removal of trees along the Lagan River in Stranmillis have called for new work on the site.

Locals were back in protest on Monday after the Department of Infrastructure previously removed hedges and trees last month that harbored a variety of wildlife. They said that during today’s protest, contractors built a metal fence around the site they had gathered at.

The works are part of a £17million Belfast flood mitigation program and it is estimated that when completed the works will save £250million in flood damage over the next 100 coming years.

Local resident Laura McKee said residents would like to meet with Infrastructure Minister Nichola Mallon to discuss the matter.

“We are really upset about the cut trees and hedges along the Lagan,” she said.

“For us, we are residents. This area had beautiful sycamores and my friend’s daughter was down. She was really upset because they had been shot.

“They talk about a flood rise wall but they don’t look at the biodiversity of this town and it seems to us as locals that DFI is going for the cheapest common denominator rather than looking for more progressive ways of working around trees, wildlife and biodiversity.

“We just want real answers and a real public consultation that we’ve been asking for for weeks.”

Sinn Féin local councilor John Gormley said his concern was that any damage caused by the project would be kept to an absolute minimum.

“Unfortunately, the project to date has been characterized by a lack of communication, a lack of consultation and a lack of transparency to the point that people are standing here today unaware of DFI’s intentions. Are they going to cut down trees or are they going to do other work? He asked.

A tree planted by Grace Bannister, #Belfastwas the first female Lord Mayor on 7/02/79. A gift for the future, planted with hope in a moment of sadness. @deptinfra are to take it off next week; it’s on the way. Their plans do not map habitat or heritage. @KateNicholl @belfastcc @SaveOurLagan pic.twitter.com/85yL1PtnBK

There have also been concerns about the historic significance of some of the trees residents fear they will lose, including one planted by Belfast’s first female Lord Mayor, Grace Bannister.

Cllr Geraldine McAteer added: “Grace Bannister planted this tree in the 70s and it is part of local history here in Stranmillis, but also part of Belfast history.

“We are here because the residents contacted us and they want us to help them preserve these trees. Hundreds and thousands of people walk along the Lagan here day after day, it’s fantastic for their well being and they really love these trees and the ambiance they bring.

“To just destroy this without explaining to people why and convincing people that they have considered other alternatives to destroy this natural heritage that we have in this city.

“The Ministry of Infrastructure and its contractor should be much more creative in how they approach these projects so that they seek to protect the natural heritage that we have here as well as protect the citizens from any flooding.”

We call on the Northern Ireland Assembly to establish an independent environmental protection agency NOW – Sign the petition! https://t.co/zIocb2b8qg via @UKChange

Alliance MP Paula Bradshaw said she fully supports residents in their fight to protect the trees and lessen the environmental impact of this flood mitigation project.

“The Department of Infrastructure needs to stop ongoing work and engage with residents, who only want the best for their area,” she said.

“Instead, he intends to move forward with complete disregard for the environment, biodiversity and local engagement. People in South Belfast want to see our natural heritage protected and extended.

Not finished yet! @allianceparty and locals put the diggers on pause. For now. pic.twitter.com/s9VZR97Mtw

Lord Mayor, Clllr Kate Nicholl added: ‘We must explore all options before any further trees are removed and I have written to the Department to press this case.

“Communities have the right to be involved in these decisions, but officials remain silent with representatives and residents.

“One of these trees has a special personal and historical significance, as it was planted in 1979 by Grace Bannister, Belfast’s first female Lord Mayor. I want to see it commemorated, not demolished. Let’s move Belfast forward by preserving this good things we have and keeping green policies at the heart of our decision-making.

A spokesperson for the Department of Infrastructure said: ‘No clearing work is planned today as part of the Belfast flood program. Ongoing work at Stranmillis today involves excavation work to locate utilities to help inform the detailed design of this important project.

“A meeting was held last Wednesday (February 16) between departmental officials, elected officials and members of the local campaign group regarding the need for limited deforestation work at this location.

“The Department’s careful consideration of alternative routes for the flood wall was explained at the meeting and that unfortunately the removal of some trees will likely be required to facilitate construction of this critical infrastructure to protect more than 1500 homes and businesses flooded.

“Assurance was again given that this would be kept to an absolute minimum and clearance would only take place when all other viable options for the construction of the flood wall had been exhausted.

“The Department had previously engaged an independent arborist to carry out a survey of the existing trees during the development of the project design and re-engaged the arborist regarding the proposed necessary works at this location to solicit their professional input.

“Once advised that one of the trees identified for removal had been planted by Belfast’s first female Lord Mayor, officials then informed Belfast City Council. This tree has not been removed at this time and the department is in contact with the independent arborist.

“If it is necessary to remove this tree to facilitate the construction of the flood barrier at this location, it is expected that one of the replacement trees to be planted, as part of this project, will be located near this location. place and dedicated to the former Lord Mayor.

The spokesperson added that the contractor had repeatedly requested that protesters move their protest outside the site area, as they attempted to secure the work area.

“Protesters refused to leave the site and, in the interest of security, part of the site which protesters had occupied was cordoned off with a barrier.

“The contractors continued work in another area of ​​the site during the protest. All protesters had left this area before the work was completed and the area is now fully secure.”

Do you have anything to say on this issue?
If so, why not send a letter to the editor via this link?