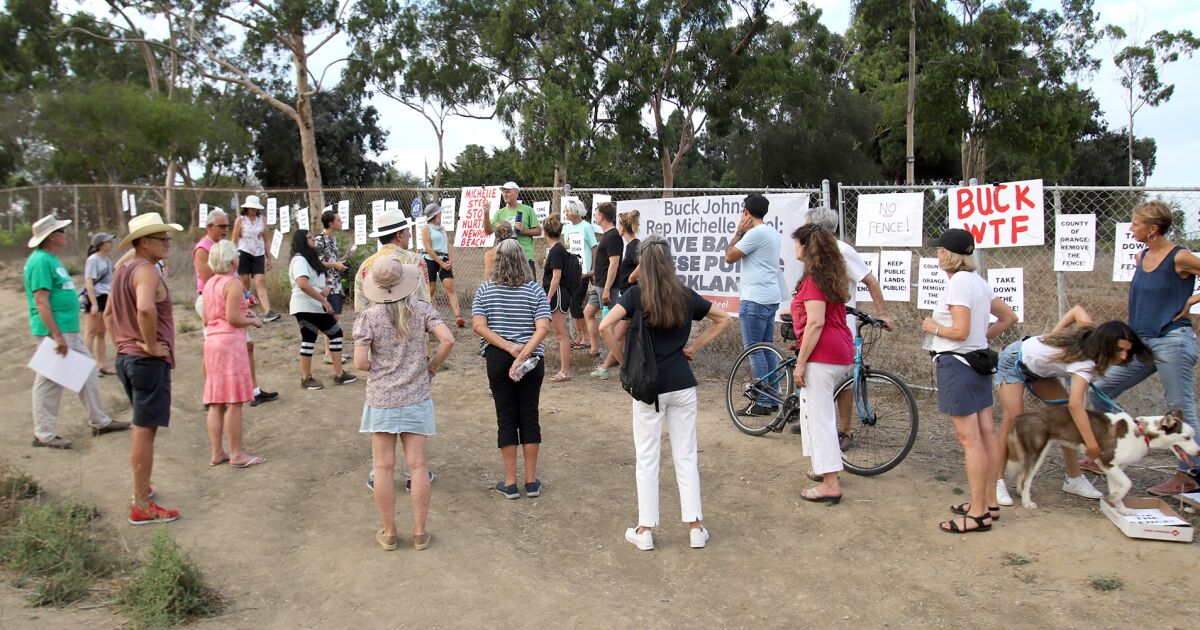 Protesters gather in Back Bay, calling for the removal of the fence around the county park

A small but vocal group of protesters gathered Thursday night in Newport Beach’s Back Bay, waving signs and calling for the removal of a fence surrounding county-owned land that was nearly sold to a political donor local last year — if it hadn’t been for the intervention of residents and Orange County Supervisor Katrina Foley.

The issue centers on the proposed 2021 sale of a 0.32 acre park parcel to Buck Johns, whose private property adjoins the parcel in Upper Newport Bay, for an estimated $13,000 . Although the deal ultimately did not go through, its process and consequences have come under intense scrutiny by a county grand jury and, more recently, the state Coastal Commission.

Although the land remains county property, a fence still stands around the plot, and in declining to remove the fence after Johns’ attorney sent a letter threatening legal action, county officials “relented inappropriately”. [the parcel] for private use,” according to the Orange County grand jury report released in June.

Thursday’s protesters carried signs reading ‘Make our park public’ and ‘Take down the fence’ as they stood at the corner of Mesa and Upper Bay drives.

They were sometimes greeted by honks of support and bystanders on foot who took a sign and joined the protest just outside Johns’ home.

The group then marched to the fence at the back of Johns’ property, attaching signs to it with zip ties and evoking references to the Berlin Wall, with one shouting, “Mr. Gorbachev – I mean, Buck, tear down that fence!

In August, the state Coastal Commission sent a letter to county officials saying the fence is in violation of coastal law. In the letter, District Law Enforcement Officer Nicholas Tealer noted the grand jury report’s recommendations and said the state agency supports the removal of the fence and any other encroachments.

County spokeswoman Molly Nichelson declined to comment on the commission’s letter, and Johns’ attorney Patrick Muñoz did not respond to a request for comment by the press deadline.

In a prepared statement released by his office Aug. 23, Foley said the Coast Commission’s letter “confirms that public lands are to remain for public use – not private interests. In my first meeting of the Board of Supervisors in April 2021, the council considered a sale of public land for just $13,000. I immediately stopped the sale to review the details and legality. Afterwards, over 1,000 residents submitted signatures. objecting to the sale, and I removed the item.

“After the landlord sent a letter threatening legal action, the county refused to ask him to pull down his fence,” Foley continued. “I have always stood with the community in disagreement with this inaction, and I am glad the Coast Commission has finally weighed in to uphold the illegality of allowing it to be fenced off on public land.

“I look forward to the day when we see the fence removed and allow the community and wildlife to enjoy this beautiful land again.”

Dan Jamieson organized Thursday’s protest in coordination with Susan Skinner, with plans coming to fruition over the past week.

Skinner said this was the first in a series of protests planned if the county did not remove the fence.

Skinner said she views the refusal to pull down the fence as political patronage.

Dan Cohen of Newport Beach said he was protesting Thursday night in place of his mother, Jean Beek, an activist who helped save Newport Bay.

“The Irvine Co. was ready to develop all of Back Bay. She and her friends worked to stop the trade and now you see the result. Here we are 50 years later fighting the same fight we fought 50 years ago, that public lands should remain in public hands,” Cohen said. “It’s strange, but here we are.”
Support our coverage by becoming a digital subscriber.