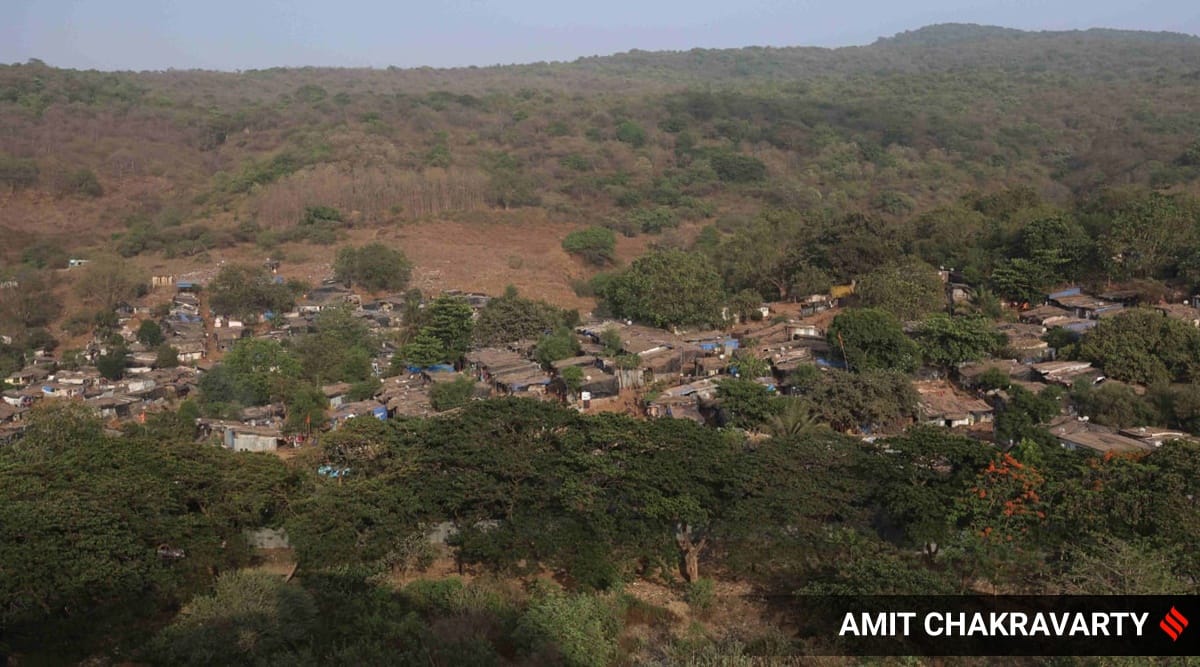 This Saturday, the Bombay High Court’s order to clear Sanjay Gandhi’s national park of encroachment will run out for 25 years, but little has changed on the ground.

The petition was filed by Bombay Environment Action Group (BEAG) for the removal of huts and a halt to quarrying in forest land. Although the final order came much later, in 2003, the state forest department made virtually no progress in removing the encroachment. Huts have multiplied and the latest area to fall victim is Sai Bangoda, near Lake Vihar, where nearly 100 acres of forest land has been encroached.

The SGNP covers 103 km² and stretches from Thane to Borivali on the east-west side, and from Goregaon to Dahisar on the north-south side. These slums are largely on the outskirts of the park.

Environmentalist Debi Goenka, who previously worked for BEAG, told The Indian Express: “The problem was that the demolition was not done in an efficient manner. The perimeter wall was not finished. Many of those who obtained pucca houses in Chandivali sold them and returned to the park’s slums. I think only 10% of slums have disappeared.”

However, Goenka pointed out, taxis and cars have been banned from entering the park and food stalls have also been removed. He also said that quarrying had completely ceased. Now it is planned to have electric vehicles to take visitors from Borivali main gate to Kanheri caves. The Malad side is one of the most affected by slums. In Bhandup West, near the BMC filtration plant, the forest department has built a perimeter wall, but there are hordes of slums inside. When this correspondent visited the scene two weeks ago, two groups of slum dwellers were playing cards inside the wooded area and there were beer bottles lying around. Cases of wandering leopards in housing societies are also common.

Besides the encroachment, there are a few tribal hamlets that need to be moved. When the HC judgment was delivered, the SGNP was headed by an officer with the rank of sub-curator. DCF Anand Bharati had been here for almost 12 years removing the huts but failed to do so as the encroachment continues. Today, the SGNP is headed either by an officer of the rank of chief curator or that of curator. The current field manager is Indian Forest Officer G Mallikarjun and he has two assistant conservators to assist him. The SGNP had also secured many more guards to help with the demolition.

In the early years, the demolition crews faced intense opposition from slum dwellers. They allegedly burned down their homes and blamed the Forestry Department for it or accused forestry staff of assaulting their wives or even threatening cases under the Scheduled Castes and Scheduled Tribes (Prevention of Atrocities) Act 1989.

Along with the order to remove the encroachments, the High Court also issued an order to repossess 100 acres of quarry land in Dahisar, which was done.

Clement Ben, another Senior Chief Conservator of Forests (West) told The Indian Express: “SGNP is a natural forest in a sea of ​​humanity. It is one of a kind in the whole world. More recently, a woodlot in Aarey was transferred to the Forest Department. But the removal of slums has not taken place. In the 1997 ruling, a slum upgrading program was to be implemented. The first phase took place but none of the slum dwellers came forward during the second phase.

Ben said the Forestry Department is building protective huts (areas where forestry personnel can hide) along the border, which will monitor new encroachments.

Former IAS officer Praveen Pardeshi, who was the forestry secretary and later the additional chief secretary of the CM office, said, “I was the forestry secretary 15 days after the judgment. We have completed most of the boundary walls to prevent further encroachment. We have removed the encroachment to some extent. We also had a plan to rehabilitate 2,000 families and this was approved by the government. This is the only way to make SGNP slum-free. I remember a lot of slum dwellers were moved to Chandivali.”

But the retired senior chief forest (wildlife) conservator, Nitin Kakodkar, has a different view. He said: “The juxtaposition of eligible and non-eligible huts caused a problem. Big chunks couldn’t be cleared all at once. This was the main reason for the failure. [Prior to 1995, slums were protected, hence, eligible. The ones after were unprotected. However, later, the government extended the protection to slums constructed till 2000.]”

Environmentalist D Stalin of the NGO Vanshakti has proposed a different solution. He said: “More than 25,000 new barracks have been erected since the judgment. Slums will never disappear. I had suggested that instead of giving away houses, take those areas out of the park and add new areas that aren’t built on. I also sent a list of domains. But the problem got worse. The Forest Department has been ineffective in stopping further encroachments.”

There have been incidents of leopards straying to Gorai village in Borivali West across the creek, and also to the Vikhroli mangroves when crossing the railway line. On many occasions, leopards come to human settlements to kill stray dogs.

NCP leader Vidya Chavan, who led the struggle for slum dwellers, said, “I was in Janata Dal when I championed the cause of slum dwellers. I used to travel by train and I met women whose houses were demolished by the forest department and I took up their cause. Once, I traveled on my bicycle from my home in Vile Parle to the Damu Nagar demolition site. My intention was to save the houses of the poor.”

South Kingstown gets $18,750 for sewage disposal from boats