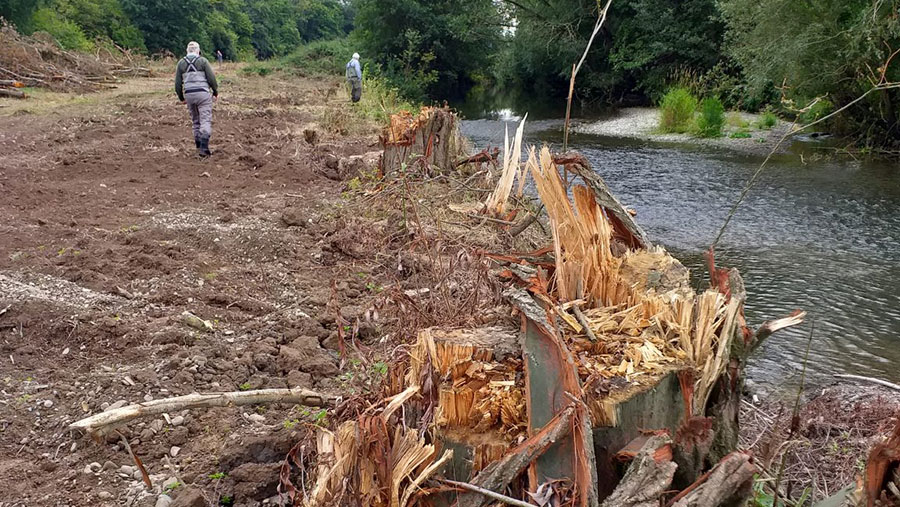 A landowner is to restore a stretch of the River Teme in Herefordshire after removing trees and bank vegetation without permission.

Anglers reported the work to Natural England in August this year and the government body launched an investigation.

Environmental campaign group Fish Legal has raised concerns about the works, which fishermen say involved the use of heavy machinery to clear trees and vegetation from a stretch of the river.

The river runs through northern Herefordshire for part of its length and is protected as a Site of Special Scientific Interest.

A Fish Legal spokesperson said: “Mature trees that have been felled will take decades to recover and will no longer provide bank stability, habitat and shade for all manner of aquatic species.

“Like most British rivers, the Teme is in a precarious state. Any work on the bank must be carried out sensitively and be fully approved by Natural England and the Environment Agency.

Natural England confirmed that the work had been carried out without permission and that it was taking action against the landowner.

A spokesperson for Natural England said: “Natural England is aware of the unauthorized work on the River Teme and is working with the landowner to agree and implement a comprehensive restoration plan for the area that has been damaged.

“The owner has acknowledged that the work was not consented to and says he will do the necessary restoration, which is already underway.”

Earlier this year, Herefordshire farmer John Price pleaded guilty to damaging the protected River Lugg after a high-profile investigation by Natural England and the Environment Agency into unauthorized maintenance work from the river.

Mr Price, who owns land on either side of the protected river, admitted to several offenses committed between 1 and 30 November 2020 which were contrary to the Wildlife and Countryside Act 1981 and the Wildlife Regulations environmental permits.

These included altering shorelines, using vehicles to damage riparian habitats or disturb species of interest, without prior consent.