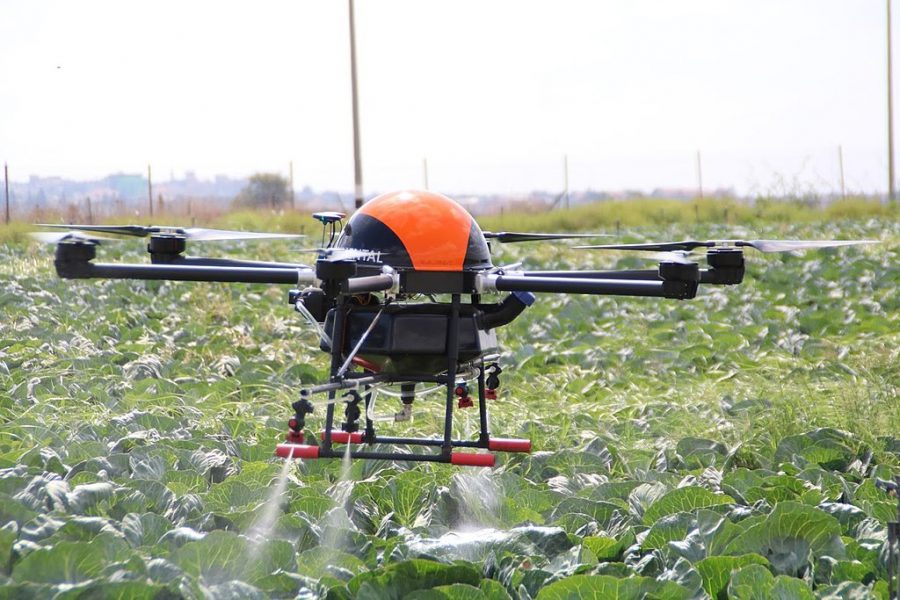 A few progressive farmers in Tamil Nadu have already started deploying drones to spray pesticides and they find it faster, cheaper and more effective

After the implementation of MGNREGA, farmers struggled to find laborers to undertake the difficult task of manually spraying pesticides. Pic: Wikipedia representative image of an agricultural drone

The delta districts namely Thanjavur, Tiruvarur, Mayiladuthurai and Nagapattinam in Tamil Nadu are now in the midst of Samba and Thaladi season and are actively engaged in paddy cultivation. While Samba crops will be harvested in the first week of January 2022 as the Pongal festival approaches, Thaladi crops will be harvested after Pongal.

The region has already received heavy rains and northeast monsoon rains are also expected from October 26th. Agricultural activities are in full swing in these districts known as “the rice bowls of the state”.

Farmers, however, are currently facing a major labor shortage to spray pesticides. The reason for the labor shortage is largely the fallout from the MGNREGA scheme, under which villagers get guaranteed wage employment for 100 days. Lately, this project has been attacked by many political parties such as Naam Tamilar Katchi from Seeman.

A substitute for workers

In this situation, drones or unmanned aerial vehicles have emerged as a useful substitute for workers. A few progressive farmers across the state have already started deploying drones to spray pesticides and they find it faster, cheaper and more effective.

Arivazhagan, a farmer based in Thanjavur, owns 40 acres of land on which he grows paddy. Previously, he manually sprayed pesticides taking 10 tanks to cover an acre. (The capacity of a tank is 13 liters of pesticide). “A laborer, who is paid ₹600 per day, covers a maximum of three acres in one day. But today we are struggling to hire labor as many struggle to carry the spraying equipment and walk through the water and mud filled farm,” Arivazhagan said.

Drones have many advantages, the farmer added. “The drones are able to finish spraying in four to five hours using a single tank to cover an acre. Moreover, the crops seem to absorb the pesticide by nearly 95%,” Arivazhagan pointed out. Additionally, they pay ₹425 for using drones.

Chinnasamy, another Salem district farmer, grows maize on his two and a half acres of land.

According to Chinnasamy, he pays ₹500 for one worker to spray 10 tanks of pesticides. But he may have to pay the worker ₹200 extra to fetch the water to mix with the pesticide. In addition, Chinnasamy felt workers struggled to spray pesticides on maize crops that tend to grow tall and tower over them.

“Before the MGNREGA program, we had people coming forward to do this work. But now they find it too difficult,” Chinnasamy said.

Chinnasamy also felt drones were more viable. Farmers can use one tank to cover 10 acres using drones, while if done manually, more pesticide tanks are needed. He cited the example of the pesticide brand Delegate, which costs ₹1,000 for a 100ml bottle.

He explained: “When we spray manually with sprayers, we have to use 10ml per tank. To cover one acre we need to use 10 tanks and for 10 acres we need 10 bottles. It costs us ₹10,000 but when we use drones we only need one tank to cover 10 acres. Instead of spending ₹10,000, now I only need to spend ₹1,000. In addition, when spraying by drones, the pesticide is absorbed by the roots of the crop and therefore the yield is also good. »

These drones are developed by the Center for Aerospace Research, Madras Institute of Technology, which has more than 20 years of experience in drone research. The institute collaborates with the government and offers drone services. Currently, 40 drones are used for agricultural activities.

“Farmers who like to use drones will contact us and we will provide the service. By word of mouth, the effectiveness of using the drones is also spreading among other farmers in the area and they are getting in touch,” said Nathan, who pilots the drones.

“The use of drones will solve unemployment”

Addressing the federal government, Professor K Senthilkumar, director of the Center for Aerospace Research at MIT, said the use of drones would solve unemployment.

The director pointed out, “In Tamil Nadu, there are nearly 13,000 villages. A drone costs around ₹50,000. If ₹60 crore to ₹70 crore is budgeted for it, all villages can have a drone. A drone unit can have 10 members who can operate and maintain the drones. Even a person who has completed the ITI course can be employed with a salary of ₹30,000 per month. In this way, the use of drones can combat unemployment.

The state should soon launch a Drone Corporation. The Aerospace and Defense Policy of Tamil Nadu has also given a boost to drones by setting up a drone testing facility.

Senthilkumar said that by 2030, the drone industry will contribute around $20 billion to the economy. “With this in mind, the Union Government recently approved the Product Linked Incentive (PLI) for drone manufacturers. Under the PLI, drone manufacturers will receive a 20% incentive for any added value,” he added.