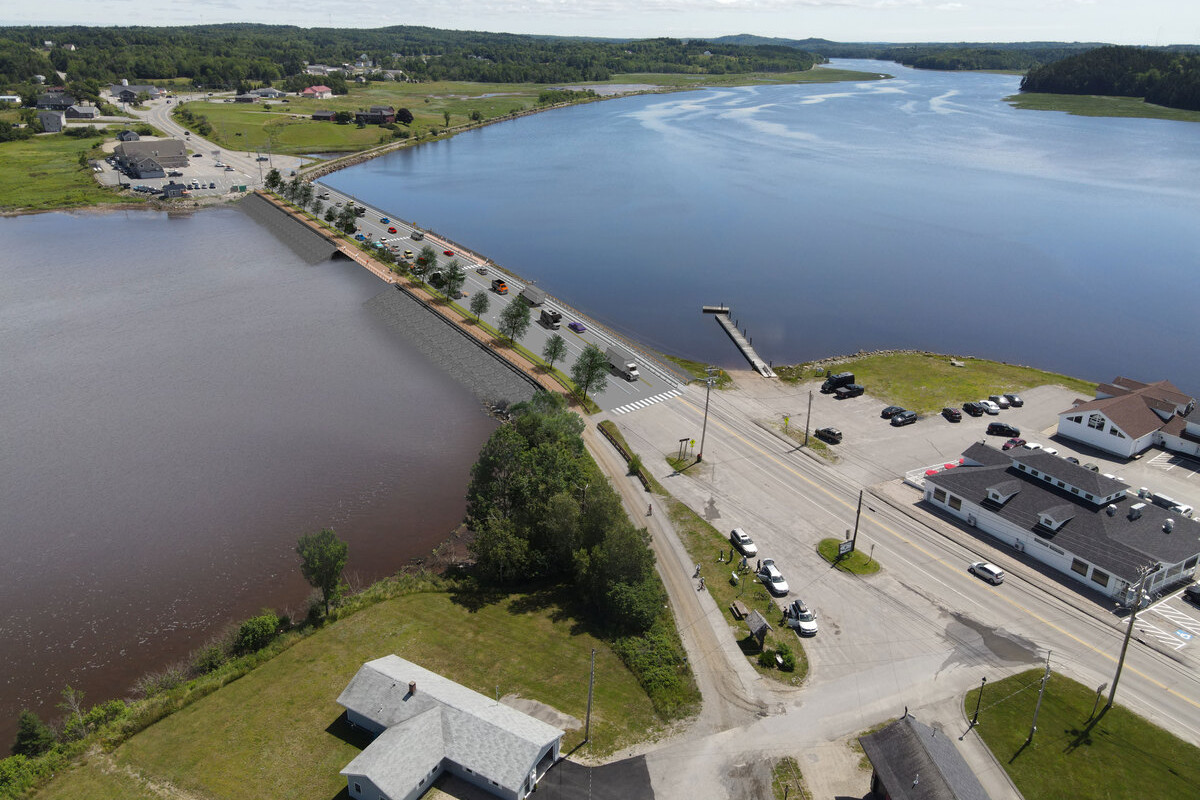 State transportation officials plan to replace a decades-old levee where Highway 1 crosses the mouth of the Middle River in Machias with a bridge, which will restore natural tidal flow into the Middle River from the adjacent Machias River. But for nearby landowners, this is an update that comes with some unwanted changes.

The bridge would be about 1,000 feet long with a wide span in the middle to allow the tide to flow underneath. This would allow fish passage currently blocked by the levee – which the National Oceanic and Atmospheric Administration has flagged as a concern.

Federal officials told the Maine Department of Transportation that any major work on the structure, where Highway 1 and the Down East Sunrise Trail cross the river, must include improved fish passage in the Middle River.

The Middle River meanders about two miles to the northwest, under Highway 192 in Marshfield, from where it empties into the Machias River at the existing levee.

This is not good news for property owners along the Middle River. Some say removing the seawall will expose their properties to greater tidal fluctuations, allowing water to flow upriver and onto adjoining properties.

“We have people who will be significantly and materially affected,” Machias City Manager Bill Kitchen said of the removal of tidal control valves under Highway 1. “There is land that would be flooded. “

At least one landowner is using their shoreline property as pasture for cows and would lose that use to the tide, Kitchen said. The state has said it will compensate landowners for such impacts, but how much they will be paid has not been decided, he said.

MDOT plans to hold a public meeting at 5 p.m. on Tuesday, June 28 at Machias Memorial High School to seek input from local residents, officials and others on the bridge proposal.

Ignoring NOAA’s concerns could jeopardize federal funding for the project, which would cost state taxpayers far more to rebuild the levee than with federal assistance, state officials said.

“Based on the information gathered to date, a bridge will best meet the purpose of the project and should improve the condition of the structure, maintain the Sunrise Trail and provide for future rail use,” said officials from the MDOT. “A bridge will restore the tidal exchange upstream of the causeway, improving fish passage and accommodating projected sea level rise.”

From an environmental point of view, this would allow several species of fish, including the protected Atlantic salmon, to move up the Middle River. By attracting more alewife, baby eels, brook trout and striped bass upstream, there would also be more fishing opportunities. It would also help turn the lower Middle River into a salt marsh, which would attract ducks, he said. The surrounding wetlands may also be absorbing more floodwater instead of channeling the water higher into the Machias River, where it frequently floods the lower part of Highway 1 between downtown Machias and the levee, a he declared.

Van de Sande said the agricultural importance of land fronting the Middle River has diminished over the decades, as the importance of preserving fish and salt marsh habitat has become more apparent.

“I believe the perceived negative impacts on some individual landowners are far outweighed by the ecological, recreational and economic benefits of this project to the region and the state,” van de Sande said. “The bridge will have significant benefits for public resources such as fish, wildlife and water quality.”

Aside from the debate over whether the tidal flow under Highway 1 should remain restricted, Kitchen said the city is “ecstatic” about the planned design of the road where it will cross the river.

The state intends to retain the row of parking spaces along the north side of the causeway, where people park to enjoy the view and where vendors often sell produce and other local produce from their vehicles. The Down East Sunrise Trail will still run along the north side of the roadway parallel to Route 1. Trees will be planted as a buffer between the trail and the parking area, and a new sidewalk will be constructed along the south side of the roadway. at the Machias River, where no such sidewalk currently exists.

“We are thrilled with the Route 1 design,” Kitchen said. “The pavement will be amazing.”

More articles from the BDN