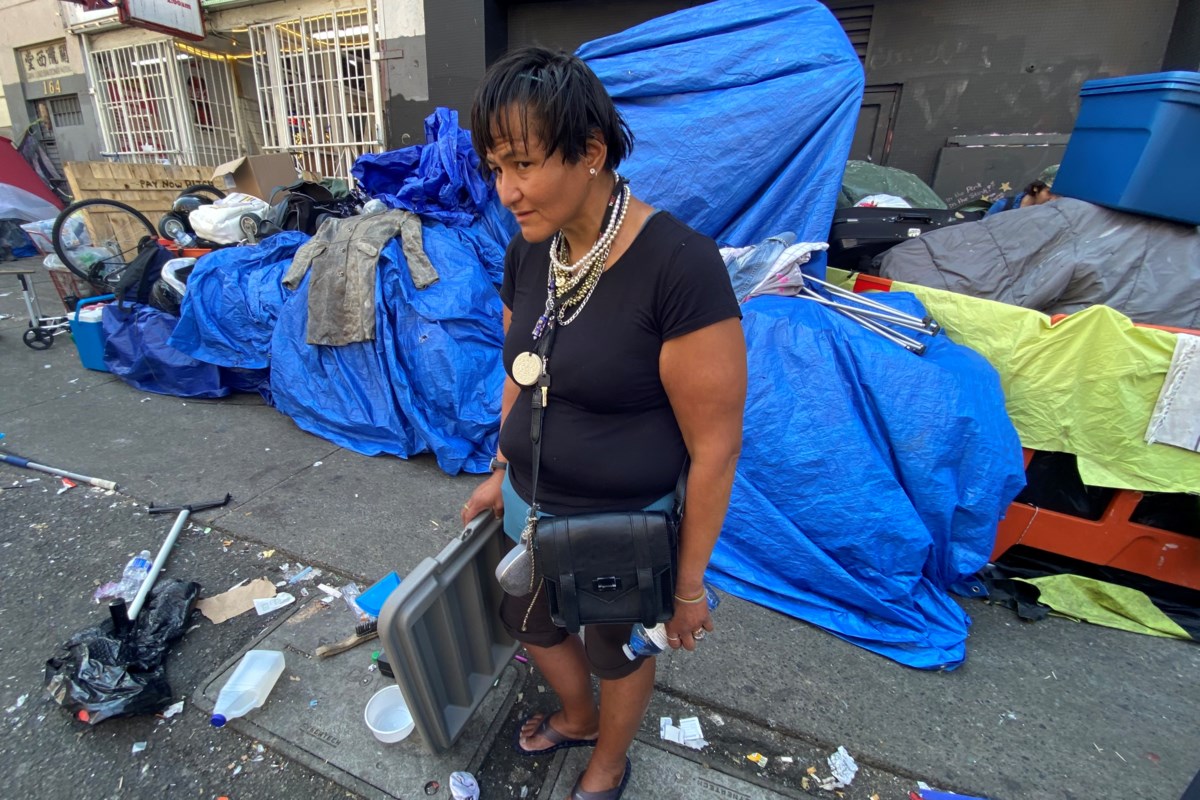 Franchesca Leo spent part of her Tuesday loading dirty laundry and other belongings into a large plastic bin outside her tarpaulin shelter on East Hastings Street.

City of Vancouver crews delivered the 360-litre bin in the morning to Leo as part of a multi-step plan to remove dozens of makeshift structures and tents from sidewalks along East Hastings.

“It’s been exhausting,” said Leo, a 45-year-old Native woman, as she filled the bin that would eventually be transported to a storage site on Main or East Cordova streets.

Between loading his bin, Leo filled out a BC Housing application form given to him by a friend, but didn’t expect to find housing immediately. she planned to move further down East Hastings to another location on the strip.

“I don’t have anywhere else to go, but if I can’t stay here, I have to go somewhere,” she said.

Firefighters fear tents could catch fire and spread to buildings

Last week, BC Housing and Mayor Kennedy Stewart said Vancouver is great that there is not enough accommodation for people living in East Hastings – a fact which competes with Fire Chief Karen Fry’s order to remove all tents from the sidewalks lest they catch fire and do not spread to buildings.

On Tuesday, firefighters, police, city crews and others from various social service agencies were largely on standby as Leo and others slowly and methodically began emptying their belongings into the trash cans.

In the morning, police had closed off the section of East Hastings between Main and Columbia streets as media, activists and local residents gathered outside the vacant Regent Hotel, which is where the city s is concentrated due to the concentration of shelters on the sidewalk. .

Capt. Matthew Trudeau, public information officer for the Vancouver Fire Services, said firefighters responded to 1,016 fires in the Downtown Eastside this year, including the Church on Vancouver Street across from the Regent.

Standing outside the Regent, Trudeau pointed to the vacant building and described the challenges firefighters would have if a fire broke out at the single-room hotel, which the city closed in 2018 due to its dilapidated condition. .

“Our teams are going to face a very difficult time to get here seeing the fire and smoke coming from this building and getting enough water on this fire in a reasonable time frame,” he said, noting that firefighters were called to a tent fire at 122 East Hastings this weekend. “It’s incredibly dangerous.”

The city had no one present on East Hastings Street on Tuesday to answer questions, but issued a news release in the morning that pointed out that street and traffic regulations prohibited structures on sidewalks.

“This is a complex effort and the city appreciates the work of the many community organizations and social enterprises who contributed their expertise and efforts, as well as the support of BC Housing and Vancouver Coastal Health,” the statement said.

“We recognize that this work will have an emotional impact on the community and everyone involved. City staff will seek to carry out the work with thoughtfulness and care for residents and their circumstances. »

The city should consider vacant land to operate camps

Kelin Ryan, 39, said he was living with a friend in a tent outside the Regent when he can’t get into shelter, saying “it’s a roll of the dice whether you have it or not a place to sleep.”

Ryan, a trained heat and freeze insulator, said the city should consider using vacant land to operate encampments, where bathrooms and cooking facilities would be available, which some US cities offer people. without housing.

Ryan, who last year lived in a townhouse with friends in Burnaby until the rent got too high, said he was on welfare but also worked day labor .

“When I go to day work, everything I earn is immediately subtracted from my income,” he said. “So it’s kind of a kick in the pants. Yeah, it helps me to be able to eat today. But that gives me no opportunity to save anything or put anything aside for the end of the month.

When asked where he was staying on Tuesday night, Ryan replied, “Honestly, probably nowhere. At this point I mean I really have no other options. So I will probably stay where I am until they literally grab my stuff or provide me with a suitable or safe place to go.

Ironically, Ryan and Leo live outside a hotel – the Regent – which has been vacant since 2018 after the city forced its closure. The city did the same with the Balmoral Hotel in 2017. Together the hotels housed around 300 people.

The city has since bought the hotels back from the Sahota family, with plans to demolish the Balmoral and possibly renovate the Regent, which was closed due to poor condition.

The Regent and the Balmoral have been on the list of the city’s top 10 problematic hotels for nearly 20 years and have been cited by police in numerous reports for drug trafficking, violence and other crimes.

Housing advocates have long called on the city to penalize Sahotas and order appropriate repairs to avoid its closure.

At one point, the Regent committed more than 1,000 by-law violations regarding fire hazards, plumbing, electrical, structural damage, and rodent and pest infestations.

The city’s latest homeless count in March 2020 recorded over 2,000 homeless people, with a large population in the Downtown Eastside.

As of 6 p.m. Tuesday, none of the tents outside the Regent had been taken down, with a pavement spot previously cleared by Leo now filled with bicycles and other miscellaneous items.

In an incident that appeared unrelated to the encampment on Tuesday, police were called to Carnegie Center on the same block.

A Vancouver Police Department news release said several officers were assaulted following the arrest of a man who allegedly threw computers and behaved erratically at Carnegie.

“As officers took him into custody, the man resisted arrest and fought with police,” Const. Tania Visintin, media relations manager, said in the statement. “A large crowd gathered and became hostile and combative with the officers. Several police officers were assaulted. Several arrests were made.

Visintin said officers were in the area at the request of the city to stay away and keep the peace while city teams conducted their information campaign on the tent and the removal of the structure on the band.

The Vancouver Area Network of Drug Users later posted on Twitter that “Mountains violently attacked and arrested DTES residents, VANDU organizers and the Pivot Legal Society after a day of peaceful observation of the City of tents of Hastings”.

Various video clips posted to social media showed a heavy police presence in Main and Hastings, with officers taking people to the ground and pushing others back into the melee, including a photojournalist.

Sarah Blyth, executive director of the Overdose Prevention Society, which has a drug use site opposite the Regent, tweeted: “Well that was crazy…the community was working with firefighters and city workers to get the rubbish and potential fire hazards under control to reduce risk.Police were neither needed nor helpful and in this situation the violence escalated.

Deputy Chief of Police Howard Chow responded on Tuesday night, writing, “Never easy trying to deal with an emotionally charged and chaotic scene. There to support the order of the VOC/Fire Chief and called when the violence broke out; Throw them at them. Instead, ask agents to handle priority calls elsewhere # facts matter.