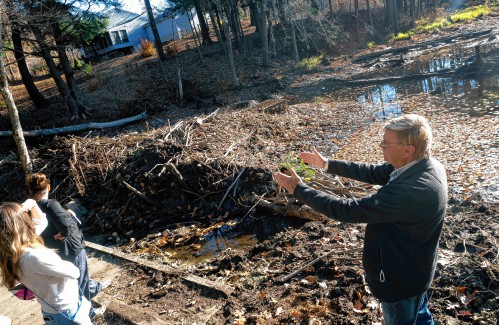 Spruce Wheelock and his wife have lived on Pine Crest Drive in Bow for 24 years and overlook a small pond behind their property.

The small pond, nestled on city-owned land between neighbors on Page Road, Pepin and Pine Crest Drive, was a habitat for beavers and other wildlife. A snowmobile trail ran along it.

On the last Saturday in October, Wheelock went to get his mail around 9:30 a.m. and was surprised to see an excavator passing the path leading to the pond. Then he realized that the beaver dam had been destroyed.

Mud and debris have been left where the small body of water once stood. Upset, Wheelock and his neighbors set out to find out what had happened.

The Bow Pioneers Snowmobile Club received Select Board approval on September 27, by a 3-2 vote, to trap beavers and clean the area around the pond drainage system of debris.

The beaver dam had caused the pond’s water levels to rise, and the drainage systems that had been installed to lower them had proven ineffective, club officials said. The dam had risen above the bridge that leads to the main trail system used by hikers, runners and snowmobilers.

On October 29, club members removed the debris and part of the beaver dam. They said this was done to reduce the risk of flooding of the bridge near the pond and to restore the pond to its original water level. Residents said the two trapped beavers were killed.

Beaver dams not only serve as homes for beavers, but can help create habitats for wetland species including fish, birds and turtles. However, their dam-building prowess can sometimes lead to flooding issues on both public and private properties.

State law states that any city, town, or state employee is authorized to remove beavers, destroy beaver dams, build beaver pipes or fences on their property to protect land, public roads or bridges from damage. The law also allows the use of machines as long as they do not enter the water, wetlands or adjacent banks.

The Bow Pioneers received a permit to trap beavers using snares from the law enforcement division of the NH Fish and Game Department. The permit, dated September 28, was forwarded to the Town of Bow.

The scorers are upset they weren’t consulted before the dam was removed and say the club could have found another way to connect to the main trail network. They worry about a drop in property values ​​and an increase in mosquito infestations following the emptying of the pond water.

They wondered if the city had given permission to drain the pond or just “remove the debris,” as they had requested.

According to the minutes of the September 27 select committee meeting, Mark Dube, the Bow Pioneers Trail Master, requested permission to trap beavers and clear debris around the pond’s drainage system.

Following the meeting, the club sent an email to David L. Stack, the general manager, asking him to confirm receipt of the endorsement. The email requested confirmation of permission to remove the dam after the beavers were removed to prevent further damage to the bridge.

In his email response, Stack said, “You’re right about the debris removal and I signed the permit for the beaver trapping.”

However, Stack later said removing the entire beaver dam was not a topic of discussion at the meeting.

But from the state’s perspective, the debris is considered part of a beaver dam, said Robert Mancini, conservation officer for New Hampshire Fish and Game.

The snowmobile club members were trying to save the bridge from damage and not trying to bother the neighbors.

“We knew that wet areas can be a problem with NH DES so we insisted that we had checked with Mr Stack and the coach that we were authorized, according to their approval and the regulations, to trap the beaver and removing the dam with an excavator,” said Anthony Foote, Vice President of the Bow Pioneers.

For their part, the neighbors want the idyllic pond restored to what it once was – beavers and all.

To respond to residents’ complaints and provide clarification on the matter, the removal of the beaver dam should be discussed at the next town meeting.